What is the Tower Tarot

How is the Tower Tarot Card Depicted

A stone tower atop a craggy cliff is struck by lightning and flames burst out from the top and windows. Two people are seen falling headfirst out of the tower, one headed forward, while the other backward. There is also a giant crown that being dislodged by the powerful thunderbolt appears floating off the tower’s top. Clouds of grey smoke seem to engulf the black sky.

What Does the Tower Mean in the Tarot Card

The tower symbolizes an unexpected change that leads to unforeseen events, very much perceived in life. The implication is to face such challenges with grace so as to keep moving on since such happenings are inevitable.

The lightning bolt that destructs the tower represents a momentary ray of truth that breaks down existing blocks of false ambitions and ignorance. The orientation of the lightning from left to right implies that the degeneration is from spiritual to material.

The 22 flames, signifying the 22 Major Arcana are actually the Hebrew yodh. The figures, corresponding to the chained captives of the Devil tarot fall head first thereby signifying how a sudden awakening of spiritual consciousness jumbles up all previous notions. The gray clouds stand for the impending misfortune that is intended to strike everyone indiscriminately.

The Tower as a Person (Signifier)

The card stands for someone who is going through a rough patch in life and is therefore always moody, angry, and emotionally vulnerable. He may also turn destructive at times. 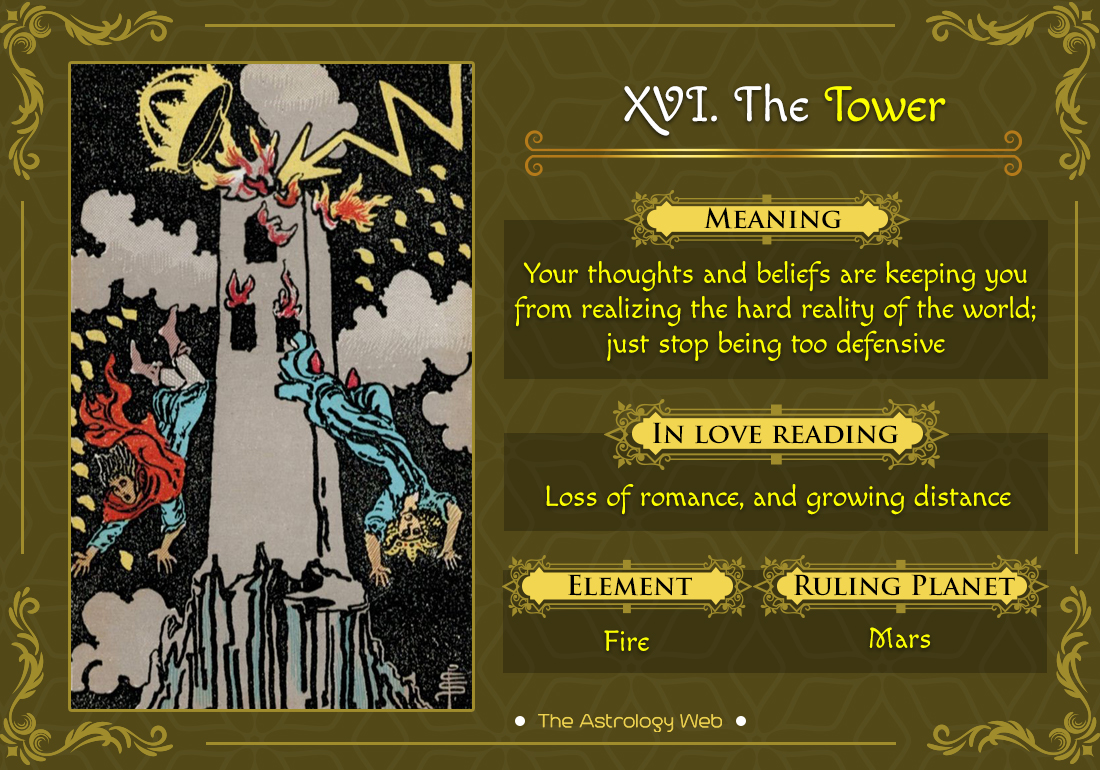 Interpretation: It stands for the shock and insecurity you experience on realizing that your previous notions about a particular situation are wrong.

Habituated to the narrow confines of your life, you tend to take certain thoughts and beliefs as constant. Naturally, you feel shaken on seeing the tarot in the reading since you cannot understand how you have been so wrong.

The card advises you to question your perceptions so that you may analyze where the problem lies. You may undergo pain in the process, but that’s momentary.

It also asks you to demolish the structures of ego, and pride that you have created as means of self-defense. Only then you would be able to grow strong mentally.

Interpretation: If you are single and looking for love, the emergence of an upright card urges you to first to reconstruct your beliefs so as to be sure of what kind of partner you desire and thereafter search for one.

For those in a long-term relationship, the card may be an indicator of a breakup. However, if you do not want it to happen, work hard on finding a solution. Try to find what your partner feels, communicate freely and refrain from making assumptions.

Career and Work: The card signals your passiveness in taking whatever situation you are in for granted. You are so laid back that alterations are akin to a thunderbolt to you. Be ready for uncalled for reversals such that you may easily adjust to any adverse situation.

Business and Finance: You are advised not to make any risky investments since the card predicts a catastrophe. Try to figure out where exactly you stand regarding financial matters and thereafter deal with it in a straightforward way.

Health and Wellness: You need to feel positive if you are going through any ailment since the final outcome is supposed to be well. In the absence of any problem, you must try to improve your health by either doing exercise or maintaining a strict diet. 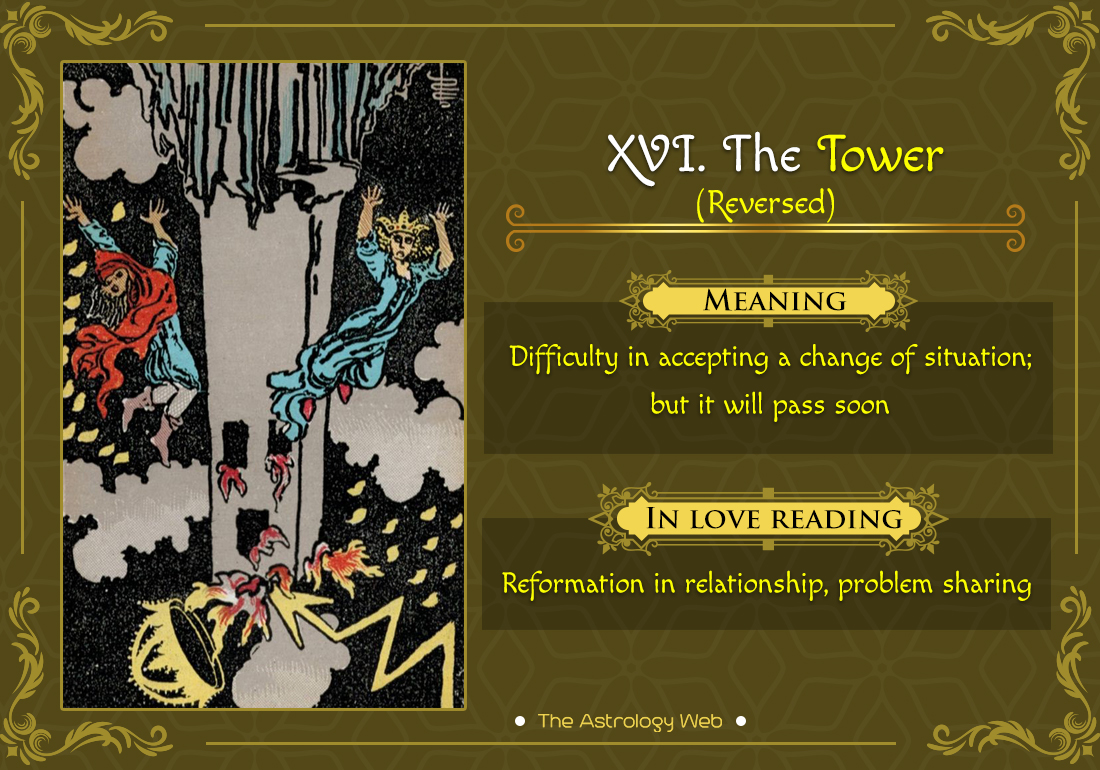 Interpretation: In an upside-down position, it refers to a time of great turmoil you would face in future and the regeneration of ideas it would bring about in you.

It also suggests that though you like changes, you detest the pain that occurs in trying to accept them.

You must confront difficult times with grace for it would enable you to learn how to deal with them and move ahead. It would also assist you to cultivate an intuitive sense required to predict any major disaster in life.

Interpretation: The card dictates that you must attempt to bring about certain changes in your relationship such that it survives and grows.

The Tower in Different Positions in a Tarot Spread

Past: The card highlights the weak foundations upon which your ambitions have been built. Naturally, following them, you have been inclined to expect rewards that are false. You need to abandon such hopes so as to create room for new, positive ideas.

Present: The conflict you are facing is strenuous but it would enable you to become stronger and determined.

Future: Only by accepting the challenges can you hope for a better tomorrow. So, be calm while facing unexpected debacles and keep the faith that everything would pass over in due time.

Tower Tarot Meaning in Combination with Other Cards