What is Justice Tarot

The Justice Tarot is the eleventh (XI) card in a suit of twenty-two cards, called the trumps or the Major Arcana, in a traditional 78-card tarot deck, used for both playing and divination. It is associated with the Libra zodiac. Traditionally, it is the eighth (VIII) card while the Strength Tarot comes in the eleventh position. However, current tarot reading follows the Rider-Waite-Smith deck, where their positions have been switched to comply with the astrological standards set by the Hermetic Order of the Golden Dawn. The ruling planet of the Justice Tarot is Venus, and her element is Air.

How is the Justice in the Tarot Card Depicted

The Justice is a woman who sits on a stone throne wearing a red cloak with a double-edged sword in the right hand upright and a weighing scale in the left one. A golden circular clasp holds her attire together. A crown with a small square at the center sits on her head. A small white shoe peeps from underneath her cloak.

What Does the Justice Mean in the Tarot Card

The Justice is an embodiment of truth, fairness, and law. She suggests not to back out once you have set on your path of action. The crown reflects clarity in thoughts while the square symbolizes protection and organization. The clasp signifies unity and equality. Her sword stresses the need to have a logical and systemic mindset to grant fair justice and gain victory while the scale suggests balancing logic with intuition. Her shoe is an indicator of spiritual results of good or bad deeds.

The purple drape symbolizes compassion whereas the gray pillars reflect the difficulties of the material world.

The golden sky behind is a sign of a new beginning after a fair judgment.

The Justice as a Person (Signifier)

The tarot card signifies someone who has excellent judgment skills coupled with an ability to communicate well with everyone.

Interpretation: Appearance of the card indicates that you are being held accountable for your actions and judged accordingly. Just like the scale held in the hand of the Justice, the events in your life are also worked out in a balanced way, giving you the fruits of your efforts.

Although you believe in fair play, it is not necessary to always speak the truth, especially in situations that demand a bit of diplomacy. Also, it would be advisable to have a certain objective in your mind when giving a judgment about someone or something as you have to be answerable at some point.

Interpretation: Those in a relationship will start feeling secure with their partner and may soon plan to settle down. Despite the flaws in your better-half, you will not mind making compromises.

Those who are in search of love will get what they deserve, but the wait might be a bit longer. You can only hope for the best.

Money and Finance: The period is favorable to splurge on expensive goodies as you would have sufficient in your pocket. If you are facing a delay in getting compensation or payment from someone, the Justice Tarot brings you good news.

Career and Job: The arrival of the card in career reading denotes that you are more likely to shine in the field of law or education. So, this could be the ideal time to put your exceptional oratory skills to the best use.

Friendship: Gel more with people who have a positive influence in your life, motivating you to take useful decisions for your welfare. At the same time, be tactful while handling the ones filled with toxic feelings against you without getting affected.

Health: Overindulgence could make you pay the price soon. Reform your eating habits if you don’t want to suffer from a major health problem in the later stages of your life. 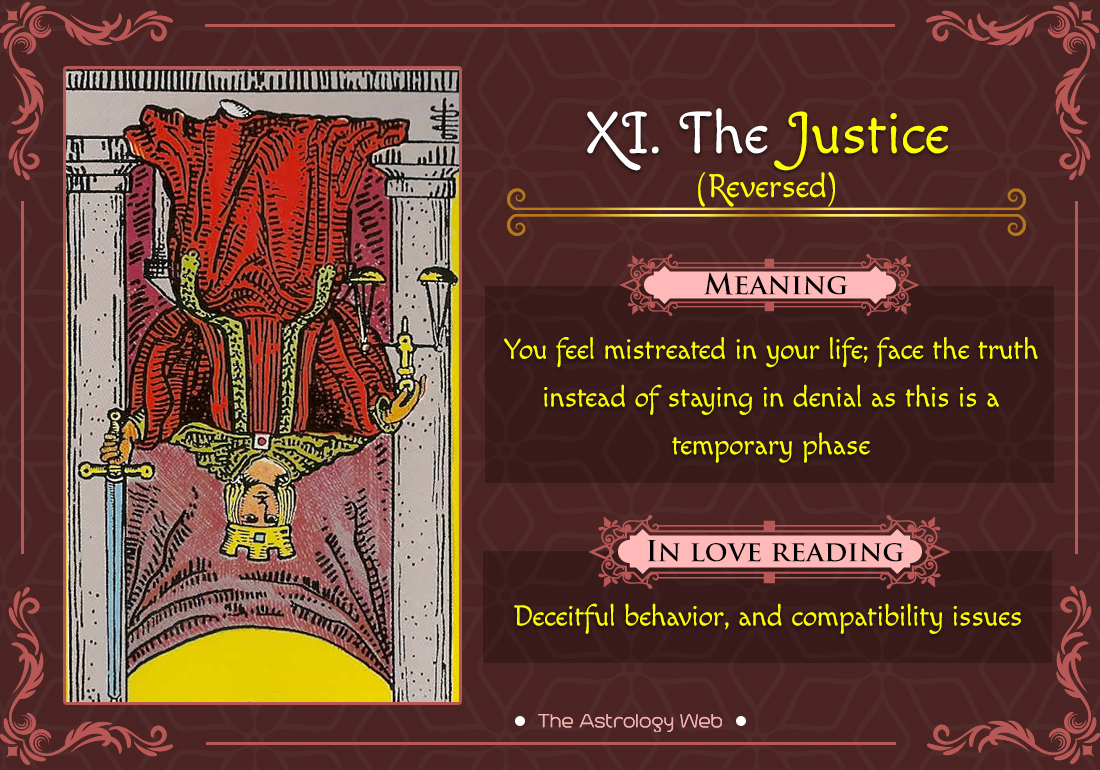 Interpretation: If the card appears in the inverted position, it means that you are not being treated fairly either in your personal or professional life. Try to analyze the situation critically and find out the reasons for your dissatisfaction. Instead of fighting with yourself, it would be advisable to accept the reality and wait for the turmoil to abate on its own.

Interpretation: For those in a relationship, it suggests a high possibility of getting cheated by your partner, leading to ill repercussions such as a breakup or divorce. The card also suggests you to stop lying to prevent your relationship from getting damaged. Without maintaining a balance, neither you nor your partner would find fulfillment and end up blaming each other.

Those who are seeking new love must first learn from their past relationships and avoid repeating the same mistakes. Give some space and allow a new relationship to strengthen.

The Justice in Different Positions in a Tarot Spread

Past: Whether good or bad, the decisions you had taken in the former years of your life like marriage, starting a family, or pursuing higher education have given you an opportunity to break the stereotype and doing something unimaginable.

Present: Right now you have to don the role of a strong decision maker. However, remember that your actions may have a long-term impact, causing a discrepancy with your close ones.

Future: In the days to come, you would soon find a source of inspiration, guiding you to follow the right path. When the right time arrives, you will realize the value of patience and self-belief.

Justice Tarot Meaning in Combination with Other Cards